The box art for Borderlands 3 has dropped and it looks awesome!

Ok, so, by know you basically know we’re total fanboys and girls of this game, but sincerely, doesn’t this box art blow away anything you’ve seen so far this year? 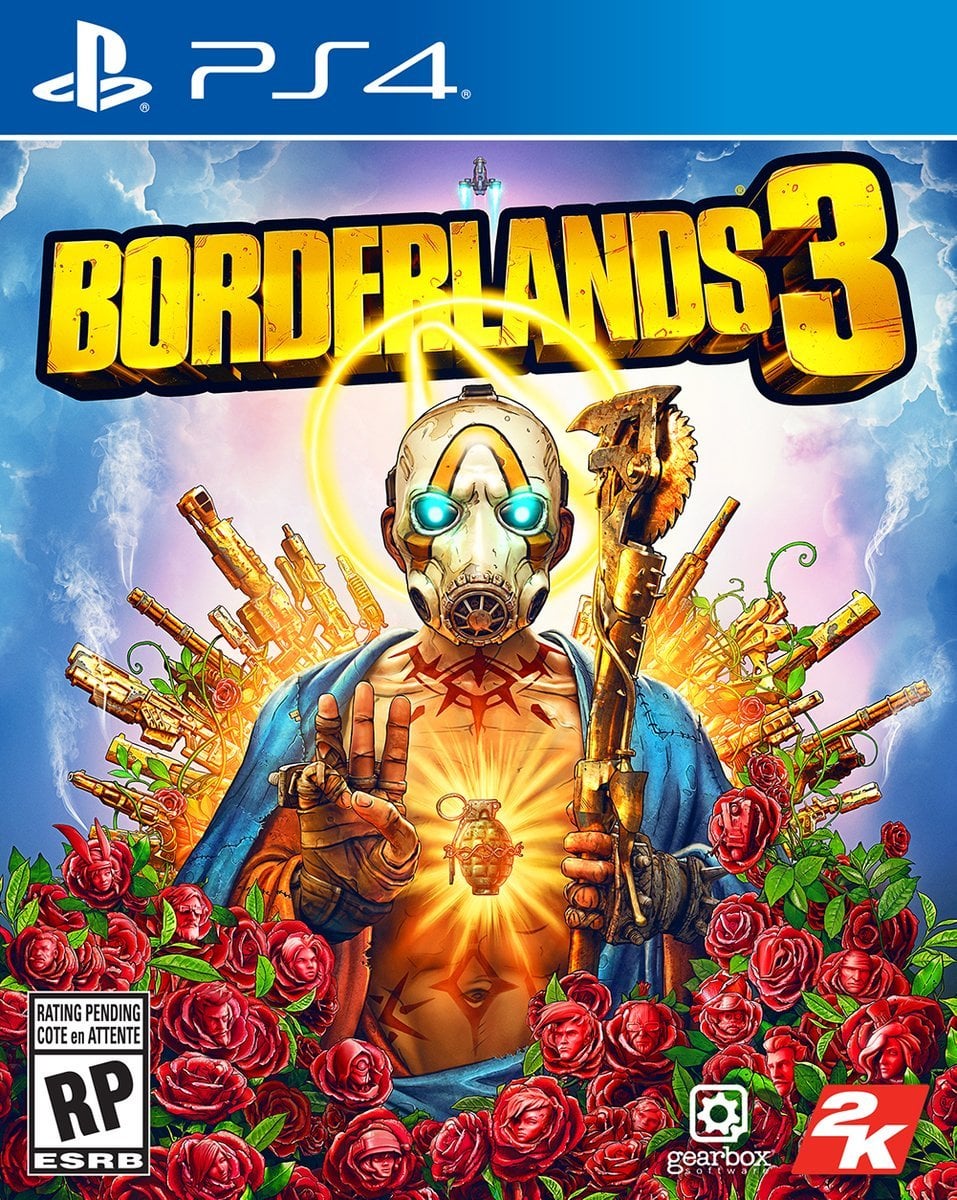 Always been a big fan of the style and art of the game. That is one of the reasons i got into it all those years ago when the original Borderlands game came out. The fact that i was able to play with friends through a split screen grinding experience was also top knotch and not something many other games were doing back then. Do you see all of the little faces in the roses? Pretty cool!

Can’t wait to get our hands on this one. God willing, we will be able to get an early copy! SPG is on its way up the ladder! We’re coming for you IGN!

Keep it locked in here to Sweatpants Gaming.

Is Hytale the new Minecraft? Trailer and preview.

Minecraft has been around for a long time and has made millions if not billions of dollars over those years. Roblox is skewed towards younger gamers but is also an extremely popular blocky builder that has millions of users.

by Hypixel Studios seems to be gearing up to take the place of both of them from what it looks like, and it looks pretty dang good!

From the looks of it, Hytale has all of the building and monster-battling of Minecraft with the addition of farming mechanics, better fighting mechanics, and better overall graphics while still keeping the blocky feel to it.

The animations are a nice face lift from what we are used to seeing with the likes of Minecraft and Roblox. I noticed a lot of subtle little movements in the facial animations that reminded me of a kids show on Cartoon Network or a Pixar movie.

The reason that we are talking about it replacing not just Minecraft but Roblox also is the addition of mini games. With the small bits of combat and multiplayer play visible in the trailer, it looks like there are some really fun game modes and mini games to be enjoyed on a competitive level, possibly even for less casual more pro-oriented players.

Overall, the game looks pretty great. We are excited to see more from Hypixel Studio in the coming months. Is Session the skateboarding game that will replace Skate 4?

We’ve all been waiting patiently for EA to throw us a bone. Unfortunately, though, there was no news of Skate 4 anywhere to be seen at the EA press conference at E3.

We thought that re-launching their online servers for Skate 3 was a good sign that we might get some kind of news, but no. They are still holding out on us.

From what seemed like out of nowhere, a French developer by the name of creā-ture Studios dropped a bomb on us. Check out the reveal trailer for Session, the new skateboarding sim coming to PC and Xbox One:

Looks prettttty good, no? We are fans.

They intentionally are calling this a skateboarding “sim.” We can tell they are going for realism because the spot featured in this video is a real one; The Brooklyn Banks.

This is the Brooklyn Banks. If you look closely, you can see this staircase in the intro video.

We all know that the Skate games based their locations on real ones, but it looks like Session is taking it a step further and carbon copying iconic skate spots. Since they are  French, I wouldn’t expect these locales to stop with Brooklyn. We would absolutely LOVE to see spots from all over the world.

This game looks like it could be what we have all been waiting for. Those of us who took to the blacktops and 10-stairs for hours on end in Skate 3 honing our skills and chilling with friends skating.

We hope the best is yet to come on this one and comment Crea-ture Studios for doing this for the world! We needed it! After all of the mysterious snips of video we were shown yesterday in regards to Bethesda’s new projects, we are pleased to announce that Fallout 76 trailer has officially dropped!

We still don’t know much about this new title, but will be following it and will let you know as soon as we have more developments on this.

Either way, we are super excited. A new Fallout game was totally unexpected, but totally welcome by us at SPG! Maybe one day they will drop a new Elder Scrolls game, too.

Until then, we will have to just enjoy Skyrim on Switch and every other conceivable console or device that they can master it for.

Here is the video: They did so much right with 4, but there were some drawbacks that the gaming community has not let up on which drags the opinion of the game down a bit. If they take the dynamic storytelling, base building, power suits, and character customization from 4 and build on those aspects I think they’ll have another monster hit on their hands. So here’s to hoping to another fine installment of a great series.

I hate to admit, but I never got the chance to sink my teeth into 3 and I would love to in a non-dated format. If it’s New Vegas remastered that would be dope as well. New Vegas is a masterpiece of a game and its storytelling can be hard to top in the video game industry. There’s always a reason to go back and play New Vegas. If you’re someone who’s reading this and hasn’t played it go! Go now and play it. Do you remember those point and click adventures from when you were a kid? We’re talking the likes of Putt-Putt, Pajama Sam, and Spy Fox. The real OGs of the point and click adventure game genre. Those games that were so epic when you were a little kid. Your parents loved them because they were able to shut you up for a few hours in the pre-tablet era.

Even as time went on, games like ‘The Secret of Monkey Island’ were created to port that kind of experience over to the adult crowd.

Aside from those big, well-known titles, there are indie game studios still in love with the genre who are breathing life back into the point and click adventure in new and interesting ways. In particular, we have been given an exclusive look at an upcoming game called ‘SOL705’ (pronounced “soul-705”)

SOL705 blends the point and click adventure genre of games with comedy, 90’s nostalgia, and mystery with a modern twist.

When we first got our hands on the game, we noticed the classic 8-bit style with a modern twist. Gone are the days of the old school limited 8-bit art style for this game. This is more closely related to pixel art as you’d see surfing the art subreddit. Its simple, yet complex and totally beautiful. We’re big on visuals here at SPG, in-case you haven’t caught on!

The backgrounds are crafted from what seems to be a mashup with photography and digital painting. They look totally cool and make cruising around the SOL705 world interesting and fresh. The way the characters can interact with them makes them feel fluid and dynamic even though they seem to be 2D images.

The characters are all well-designed and you will find yourself rooting for them to solve the mystery at hand. The entire story takes place over 7 days since you’ll (the main characters) have to get back to school, but the gameplay will make you want to solve it as fast as you can!

Without ruining anything we can safely say something strange is going on in the town. The story takes place in 1974, so you’ll be jumping back in time for this adventure. Some people in the town are starting to act super strange and then animals are acting even stranger, so you’ll have to get work asap to figure out what is going on here. It honestly reminded me a bit of Stranger Things, let me know in the comment section if you agree there. Along the way, you’ll meet some interesting characters and they share some similar archetypes we have seen in sci-fi before; there are the adventurous kids,  crazy mad scientist, and some new takes on the genre. This fact just makes it that much more enjoyable because you’ll find yourself relating to those character types we know and love. We’ve already established that this is a point and click adventure type of game. Your primary interactions will be to examine, talk, pick up, or use the different people and objects in the environment. Don’t worry the interactions and dynamic feel of navigating the town will keep the game feeling fresh.

Though we were only able to play a brief demo of the game, we already see some real promise in this newcomer to the point and click adventure game genre. If you’re into narrative-driven games that don’t require a ton from you in the skill department and rely more on puzzles and thinking, you’d probably be a fan. If you are into solving mysteries, then you are in the right place with SOL705.

For more on SOL705 and other upcoming point and click adventure titles, stay tuned right here to Sweatpants Gaming.

If you want to get the demo for yourself, you can download it on these platforms: